If you are looking for “chimney repair near me” in Chalfont, PA, you should consider contacting the staff at Apex Air Duct Cleaning & Chimney Services. Our chimney sweeps have over 40 years of experience helping the residents of Bucks County and the surrounding areas.

We are dedicated to the safety and comfort of our clients and strive to promote chimney and fireplace safety in the Chalfont, PA community. In the meantime, if you are new to chimney repairs and maintenance, here are some of the most asked questions to help you learn more about how to protect your home.

How do I know my chimney needs repairs?

There are a few clear ways to tell that your chimney needs repairing. Firstly, if there are obvious cracks or erosion,this is a sign that you may need new liner or panels on the interior or exterior of your chimney.

According to the Chimney Safety Institute of America (CSIA), if you can fit a dime into the cracks on the inside of your chimneys, the panels need to be replaced. If you can see chunks of brick or mortar that have fallen away from the exterior because of weather, your chimney needs to be attended to urgently.

Secondly, if the walls or ceiling around the chimney are damp, the chimney needs to be looked at. This is a sign of a chimney leak and needs to be repaired immediately. Water can fill up cracks or holes in a chimney then freeze and expand, causing even more damage. Your chimney will also need repairs if there is visible rust, the chimney stack is leaning, or the chimney or fireplace is malfunctioning in another way, and you are not sure of the cause.

How much do chimney repairs cost?

The Chimney Safety Institute of America (CSIA) provides a guide on costs of chimney maintenance for homeowners on their website. According to the CSIA, these repair costs can cost as little as a few hundred dollars to replace cracked panels or lining to as much as a few thousand to replace larger parts, such as the chimney cap or crown, or to replace the chimney altogether.

You may be considering making these repairs yourself to save money. However, repairs and replacements require skill and experience, so you should not try to do these on your own unless you are a certified professional.

If you want to save money, the best way to do so is to use cheaper materials for your repairs or replacements. For example, according to the CSIA, a full chimney replacement can cost anywhere from $4,000 to $30,000. The cost variation is likely due to the cost of different chimneys – a masonry chimney will cost much more than a metal one.

Who offers the best chimney repair services in my area?

If you want to pay for only the best chimney repair services in Chalfont, PA, start by reading as many reviews as you can find. A business will usually list reviews on their own website – this is a good place to start, but keep in mind that a business will only want to advertise good reviews. To gain an overall idea of a business’ products or services, you should also look at the reviews on google or Yelp.com.

Additionally, if you want to find the best chimney and fireplace professional, check for certifications when visiting their websites. Keep an eye out for certifications from the Chimney Safety Institute of America (CSIA) and the National Air Duct Cleaners Association (NADCA), also known as the HVAC Inspection, Cleaning and Restoration Association.

Are damaged chimneys and fireplaces dangerous?

Yes. If you think your chimney or fireplace is damaged or malfunctioning in any way, refrain from using it until a professional can come to fix the problem. Fireplace panels and chimney liners, along with the materials that make up the exterior, are specifically designed to reflect heat back into your home without allowing the flames to escape to other areas of the building.

If something is cracked, sparks could fly out and ignite, starting a fire in your home or business. Furthermore, dangerous chimney fires can start if the chimney is not cleaned regularly. Ash and smoke will build up over time to create creosote, an extremely combustible substance.

To learn more about chimney and fireplace safety, visit the CSIA website, which provides homeowners with many resources on how to stay safe. Before you start looking for “chimney repair near me,” make sure you understand the essentials of how to protect yourself and your Bucks County property.

What are the different types of chimneys and what kinds of repairs will they typically need? 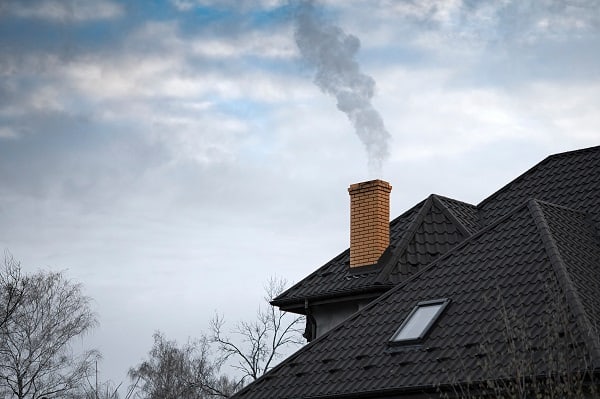 A basic masonry chimney is one where the fireplace hearth and chimney are made of bricks and mortar, or a different material designed to mimic the look. Sometimes metal will be used as a replacement for bricks for one of the components of your chimney or fireplace. In both cases, the panels and liner of the fireplace and chimney flue will need to be replaced if cracks are starting to appear.

If you have a gas fireplace instead of a traditional wood burning fireplace, you may also need to replace things occasionally, but not as often, since a gas fireplace creates less smoke and ash. Finally, if you have an electric fireplace, which is essentially a heater designed to mimic an actual fire, there are fewer safety concerns, and the most important thing is that you check to make sure it is functioning regularly, as you would with a standard heater.

After reading this article, if you believe your chimney needs repairs or maintenance, give the staff at Apex Air Duct Cleaning & Chimney Services a call at 215-608-2442 to schedule an inspection at your Bucks County property as soon as possible. Our main priority is your safety and that of those who live or work on your property. Don’t waste your time searching for “chimney repair near me” when Apex Air Duct Cleaning & Chimney Services offers the best chimney and fireplace services in Chalfont, PA.

Some information about Chalfont, PA

Chalfont is a borough with home rule status in Bucks County, Pennsylvania, United States. The population was 4,009 at the 2010 census. The borough is served by SEPTA Regional Rail’s Lansdale/Doylestown Line at Chalfont station.

Originally, the Lenape Indians dwelled in present-day Chalfont. In 1683, William Penn signed a treaty with the local chief and parceled the land to the Free Society of Traders. In 1720, Simon Butler bought over 150 acres of land, including the ‘Village of Chalfont.’ After the construction of his home and mill, Butler bought more than 400 more acres of land. Butler was a giant historical figure who acted as a legal and economic powerhouse in the area. After his death, the land was parceled to a number of people. Between then and 1901 Chalfont held several names, including Butler’s Mill, Kungle’s Tavern, Barndtsville, and Whitehallville. For many years, the most important building in the area was the tavern and public house, which has burnt down many times and now stands as the Pop Inn. During the Victorian era, a train-station was built which helped the community grow and brought about the construction of the many Victorian houses.

In 1885, Chalfont established Forest Park. Forest park started out as a small picnic ground where music could be played. The appearance of the train station in Chalfont assured the park’s success. However, as the park grew it became a small amusement park where local people could enjoy rides, a large swimming pool built in the 1930s, music (including string bands in the 1940s) and as the hosting ground for many company picnics. The park closed its doors forever in 1968.

George Eckhart later owned the Butler’s mill which burned in 1835, he built a larger mill. Later Eckhart’s son Martin inherited the mill and his other son inherited the farm. Part of the farmland included an woods of mostly oak locally known as Eckhart’s Grove which was frequently used for dance parties, family gatherings, religious camp meetings and Sunday School picnics. Later, in 1885 the mill was owned by Philip B. Grove who leased it to Valentine B. Clymer and Matthew S. Cogan when it burned again and was never rebuilt. Another gristmill was built in 1793 not far from Bulter’s mill first operated by men named Miller and Evans, later by Francis D. Hartzel, two of his sons succeeded him. After a fire in 1878, the mill was rebuilt and much of the machinery replaced. About 1761, Henry Lewis built a stone tavern operated by George Kungle during the Revolutionary period. Chalfont was known as Kungles Tavern. After Kungle, the tavern was later owned consecutively by James Morris, Lewis Morris, Abner Morris, then John Barndt from Tylersport. The village was then known as Barndtsville.