Chimney Cleaning Services Near Me: FAQ about Chimney Sweeping in Sellersville, PA

Are you spending hours searching for “chimney cleaning services near me?” Are you looking for a professional who offers chimney sweeping in Sellersville, PA? Are you eager to learn more about chimneys and fireplaces for your home or business in the Bucks County area? If you are looking for an experienced, professional chimney sweep, consider reaching out to Apex Air Duct Cleaning & Chimney Services – the best chimney, fireplace, and ventilation business in Bucks County!

In the meantime, if you want to learn more about chimney sweeping, here are some of the most frequently asked questions about fireplaces and chimneys.

How do I know my chimney needs to be cleaned?

Your chimney should be cleaned once or twice a year, but less often if you have a smokeless option, such as a gas or electric fireplace. There are several things to look out for that are sure signs your chimney needs to be cleaned. These include: 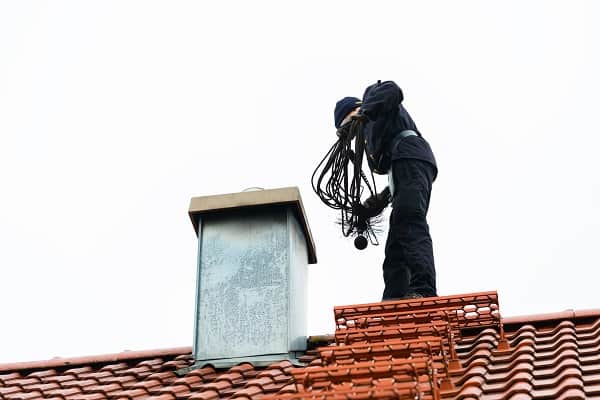 You can also call a professional for a consult or inspection if you don’t know if your chimney needs to be cleaned.

How do I clean a chimney?

Different types of chimneys will need to be cleaned differently, so be sure to do your research. However, the basic steps to follow when cleaning a fireplace and chimney are these:

You may also need to go up to the roof of the building to inspect and clean off the outside of the chimney. Be sure to spend plenty of time researching this process and pay attention to safety tips!

How much does a chimney cleaning cost?

According to the Chimney Safety Institute of America (CSIA), a chimney cleaning and inspection should cost roughly $175-$500. A chimney cleaning could cost as much as $800 if the chimney and fireplace have been neglected for a long time and more work is needed. If you are cleaning your chimney and fireplace yourself, supplies and tools should not cost more than $100. Feel free to contact different businesses so you may compare prices in the Bucks County area.

How much does a chimney inspection cost?

Some professionals include the cost of inspection with a chimney cleaning, while some may offer a free consultation where you can describe the conditions of your chimney and fireplace. An inspection will often be necessary to determine how much work needs to be done.

Who is the best chimney sweep in my area?

To find the best chimney sweep in the Bucks County area, be sure to read the reviews on the business’ website, google, and the Better Business Bureau® website. Look through the certifications the business or individual lists on their website, and research these certifications. If there are any licenses you feel they should have that are absent from the website, do not hesitate to reach out!

What are the different parts of a chimney?

There are many components of a chimney and fireplace; knowing them will help you describe the condition of your chimney to a professional, so they can estimate what kind of work needs to be done. These components include:

What is the Chimney Safety Institute of America (CSIA)?

The CSIA is a nonprofit which provides education and certification resources to chimney sweeps and dryer exhaust technicians. This organization is also dedicated to promoting fireplace and chimney safety and connecting homeowners with quality chimney sweeps. The CSIA website is an excellent resource for those who are looking for certified professionals or want to check the certifications of a chimney sweep in Sellersville, PA. Visit this website before you start googling “chimney cleaning services near me.”

What is the National Fire Protection Association (NFPA)?

The National Fire Protection Association (NFPA) is an international nonprofit which promotes industry standards for the installation and maintenance of chimneys and fireplaces. These codes are intended to minimize death, injury, and economic loss from fires. The NFPA website provides many resources so homeowners can learn more about fireplace and chimney standards and safety to protect themselves and those who live or work on their property.

Why do many chimney sweeps also offer air duct and dryer vent cleaning?

Many professional chimney sweeps also offer additional ventilation services. For example, Apex Air Duct Cleaning & Chimney Services in Sellersville, PA offers air duct and dryer vent cleaning services in addition to chimney maintenance. Chimneys, vents, and ducts are all important components of a home ventilation system. Keeping them all clean is essential to preventing internal fires, so it is unsurprising that many professionals are familiar with all three.

If you still have questions about chimneys or fireplaces after reading this article, call Apex Air Duct Cleaning & Chimney Services in Bucks County today! The staff will be happy to answer your queries; they can be reached at 215-608-2442. In addition, the chimney sweeps at Apex Air Duct Cleaning & Chimney Services have over 40 years of experience, numerous certifications, and are dedicated to customer service—instead of spending hours searching “chimney cleaning services near me,” consider them for your next chimney cleaning.