4 Warning Signs You Need to Contact a Langhorne, PA Professional That Specialized in Dryer Vent Cleaning Near You Right Away

Do you live in Bucks County? Are you looking for a dryer vent cleaning professional? If so, instead of searching online for “dryer vent cleaning near me” and hoping that you’ll find a reputable company that offers affordable services, contact Apex Air Duct Cleaning & Chimney Services! As a leading Langhorne, PA dryer vent cleaning company, we are committed to offering the fastest, most reliable results at the fairest, most affordable prices. Our team of fully licensed, insured, and certified professionals are dedicated to ensuring the safety of the homeowners of Pennsylvania. Using the most advanced techniques and state-of-the-art technologies, we’ll make sure that your vent is thoroughly cleaned, improving the efficiency and safety of your dryer. If you’re looking for the best dryer vent cleaning near you, look no further than Apex Air Duct Cleaning & Chimney Services!

A clothes dryer certainly makes cleaning the laundry a lot more convenient; however, like any other appliance in your Bucks County home, it needs to be properly maintained, otherwise it won’t function properly, its efficiency will be reduced, and it could even become a serious hazard. While you probably know that you need to clean out the lint trap before or after you dry a load of laundry, there’s another part of your dryer that needs to be cleaned: the vent system.

The vent is a crucial part of your clothes dryer. It directs the heat that the appliance generates, as well as the moisture that it pulls out of the laundry, out of your Bucks County house. Without the vent, that heat and moisture would be forced into your house, which could lead to mold growth and rot; not to mention increase the temperature inside your home and negatively impact your indoor air quality. Since it’s such a vital component of your dryer, the vent needs to be clear so that it can function properly and do the important job it’s intended to do.

Every time you run your dryer, lint, which is comprised of fibers, dirt, and debris, comes off the laundry and collects not only in the lint trap but in the dryer vent, too. Over time, the accumulation of lint can become so severe that the dryer vent can become clogged, reducing the efficiency of the appliance, and more alarmingly, increasing the risk of fire. According to the Consumer Product Safety Commission, an estimated 15,000 clothes dryer fires occur each year, and those fires occur as a result of insufficient airflow due to improper ventilation.

In order to ensure the safety of your family and your Bucks County home and maintain the efficiency of the appliance, having your dryer vent professionally cleaned is a must. A reputable Langhorne, PA dryer vent cleaning company will use state-of-the-art equipment and proven techniques and strategies to thoroughly clean the vent. They’ll also conduct a thorough assessment of your dryer vent to ensure that it is functioning properly.

There’s no doubt that professional dryer cleaning is a must, but how do you know when this service needs to be done? Here’s a look at four telltale signs that indicate it’s time to start researching “dryer vent cleaning near me”.

When you pull your laundry out of the dryer, does it still feel damp, despite the fact that the load isn’t any bigger than usual and you’re running it on the same cycle you always use? If so, that’s a definite sign that the vent needs to be cleaned.

A dryer vent is supposed to push the hot, moist air out of the appliance so that more hot, dry air can be circulated to continue the drying process. If the vent is clogged with lint, however, the moisture won’t have any way to escape, and instead, it will remain in your dryer; plus, it won’t be able to draw in as much dry air. As a result, the dryer won’t operate as efficiently, and it will take longer to dry your laundry.

If your laundry feels damp after it’s run through the dryer and you have to run another cycle or hang it up so it can thoroughly dry, that’s a surefire sign that you should look for a company that offers dryer cleaning near you. A reputable Langhorne, PA dryer vent cleaning professional will conduct a thorough assessment and will remove the accumulated lint, restoring the efficiency of the appliance.

The scent emitted from a dryer should be neutral or if you use fabric softener, it should have a pleasant smell. If, however, you’re noticing a strange burning odor coming from your dryer when you turn it on, that’s a cause for serious concern.

Lint is extremely flammable, and as the heat the dryer produces is pushed through the vent, the lint can catch fire. If ignored, the fire could potentially spread throughout the walls of your home. To avoid a potentially serious situation, if you smell a burning odor when you run your dryer, turn it off immediately and call a Langhorne, PA dryer vent cleaning professional right away. A reputable company will send a technician to your Bucks County house as quickly as possible and they’ll thoroughly analyze and clean your dryer vent.

Lint Coming Out of the Vent

One end of a dryer vent is attached to the appliance and the opposite end opens up to the exterior of your Bucks County home. The hot air and moisture the dryer produces travel through the vent and exhausts outside. As lint accumulates in the vent, it will start to collect around the exterior opening, too.

Get in the habit of checking the opening of your dryer vent every once in a while. If you see lint around the opening, it’s likely that the entire vent needs to be cleaned. A reputable company that specializes in dryer vent cleaning near you will thoroughly clean out all components of the venting system.

Are your energy bills increasing unexpectedly? While there are several factors that could contribute to higher utility bills, such as using other appliances and lights more often than usual, a prolonged temperature spike that puts more demand on your air conditioning, poor insulation throughout your Bucks County house, and price increases from the power company, for example; however, a clogged dryer vent could also be contributing to your higher energy bills.

When a dryer vent is clogged, it has to work harder to work, and the harder it works, the more energy it uses. Plus, if your laundry keeps coming out damp, you may be running your dryer more often than usual. If your utility bills have gone up and you can’t figure out any other cause for the price increase, a lint-filled dryer vent could be to blame. A Langhorne, PA dryer vent cleaning professional will thoroughly inspect and clean out your dryer vent, which will increase the efficiency of the appliance and may help to lower your energy costs.

Looking for Reliable Dryer Cleaning Near You? 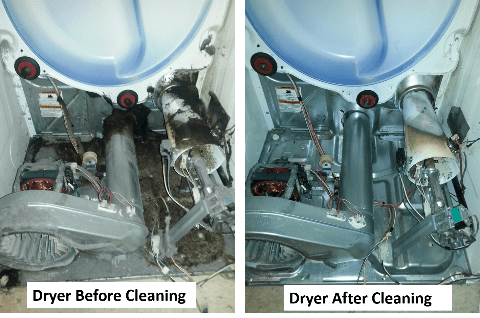 When you’re researching “dryer vent cleaning near me” in Bucks County, make sure you contact Apex Air Duct Cleaning & Chimney Services! With more than 30 years of experience and a proven track record of excellence, you can count on our fully licensed, insured, and certified Langhorne, PA dryer vent cleaning technicians to deliver exceptional results. When the team at Apex Air Duct Cleaning & Chimney Services is on the job, you can have confidence knowing that your dryer will run safely and efficiently. For more information or to schedule an appointment, call 215-608-2442 today!